Occupied Italy  is an open access digital journal dedicated to the study of the history of the Second World War in Italy and its immediate consequences, spanning between the Allied landing in July 1943 and the referendum in June 1946 . 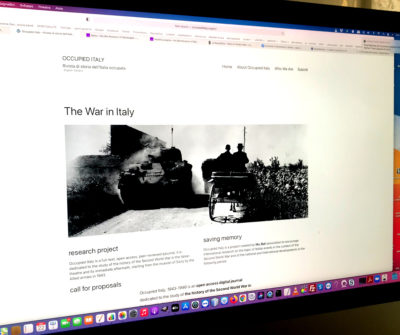 The journal was founded in December 2020 with the aim of emphasizing the relevance of the Italian campaign in the context of the Second World War, and the geopolitical consequences of the Allied landing for the entire Mediterranean area. Occupied Italy will be characterized by the scientific value of its contributions, by its attention to cultural history, and also by a markedly multidisciplinary approach.

The intent is to provide a platform for original research by Italian and foreign scholars, from different disciplinary and educational fields, focusing on the military, political, socio-cultural and economic aspects relating to the period of the Allied presence in the Italian territory. An open dialogue between different disciplines can make a significant contribution to research and studies on a subject that has not benefited from enough academic attention in recent years. The journal will also focus on divulgation and outreach aspect through a series of dedicated sections, with the aim of attracting the attention of a wider audience.

Board of Scientific Advisors